The Off-Centered Film Festival, the annual celebration of movies and beer from the folks behind Alamo Drafthouse and Dogfish Head Craft Brewery, kicks off tomorrow in Austin [...]

Alpine, TX’s Big Bend Brewing Co. has been named by at least one publication as the “most remote brewery in the United States,” making the brewery’s [...]

It looks like 2015 is shaping up to be the year of Real Ale. Exciting things are happening out in Blanco, TX, the site of Real Ale Brewing Company since 1996. An ability to [...]

Texas now boasts more than 100 craft breweries statewide, many of which opened just within the last few years. But today, one of those breweries announced that it has brewed [...] 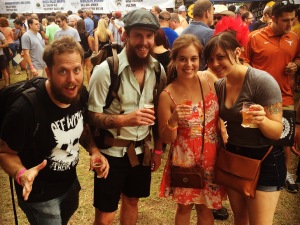 Untapped, the indie music and beer festival that’s rocked Dallas, Fort Worth and Houston, will now lay down some roots here in the Live Music Capital of the World. The [...]

Round Rock nano brewery Bluebonnet Beer Company has already been pumping out beers to area bars in recent weeks, but will officially open its taproom to the public this [...]

With the success of joints like Brew & Brew, Radio Coffee and Beer and Stouthaus Coffee Pub, the combination of Craft Beer + Craft Coffee served under one roof has [...]