Started in February 2012, BitchBeer.org is a blog that reclaims the term “bitch beer,” which is often used to describe low-calorie, low-alcohol content beverages that are marketed to serve as the female counterpart for beer, a stereotypical “male” drink. From covering the Great American Beer Festival in Denver to trying all the latest and greatest releases from local Austin breweries, Bitch Beer’s mission is to prove that any beer can be “bitch beer” and that women can be just as passionate about craft beer as men. Bitch Beer has been named one of the “Top 10 Austin Food Blogs” by the Austin Chronicle and has been featured in a number of other publications, including Austin Monthly, Zagaat and The Austin American-Statesman. Stepping away from the glow of a computer monitor, the women of Bitch Beer have appeared on several local and national podcasts, web series and television spots, including Cooking Channel’s Log on & Eat, PBS’s upcoming series Food Finder, the Beer Diaries, Bake Space’s Kitchen Party and the Beerists podcast. They have also spoken at a variety of public events, including the Texas Book Festival, the TechMunch Food Bloggers’ Conference and the Austin History Center’s Beer Garden Social: A Nineteenth-century Family Experience. Bitch Beer’s debut book, “Austin Beer: Capital City on Tap” is a collaborative effort between the co-founders of this blog.

Caroline’s passion for beer blossomed at the ripe old age of nineteen, when she spent a semester abroad in Wellington, New Zealand. After an eighteen-hour plane ride, she suddenly found herself above the country’s legal drinking age and surrounded by a burgeoning craft beer scene. After graduating from college back in Austin, she began to really gain an appreciation for the amazing variety of beers being produced in the capital city. Caroline has been featured as a guest on a variety of programs including the When in Austin and the Beerists podcasts and the Beer Diaries’s web series “Pubs, Pints and Pals.” She recently gave a talk on pre-Prohibition brewing at an event sponsored by the Austin History Center. In addition to writing about beer, Caroline works in film and video production and is an incredibly novice homebrewer and lunch beer enthusiast.

Arianna (or Ari, as her friends call her) started drinking beer once she realized it didn’t all taste like watery Budweiser. One of her proudest moments was the lunch her mom decided to order a Live Oak HefeWeizen, instead of a Dos Equis, and enjoyed it, although Arianna’s go-to pint will always be a (512) Pecan Porter (and just about any other porter). She’s spoken about her love for beer on PBS’s Food Finder show with the other Bitch Beer girls. A crime show junkie, she is a staff writer with the Austin American- Statesman who reports on events and interesting people in Texas’s capital city, a job that has shown her, over and over, the determined, entrepreneurial spirit just about every driven Austinite—including many local craft brewers—has in spades.

Wendy is a connoisseur of fine-ish cheeses, wines, tequilas and craft beers, proving that bitches aren’t limited to low-cal cocktails. One of her favorite pastimes is cooking with beer, either as an ingredient or as a way to stay hydrated. A former bartender, Wendy discovered her appreciation for craft beer after serving way too many Bud Lights to customers. She enjoys lagers, pale ales and the winter seasonals that she looks forward to all year long. She currently lives in Houston, Texas.

Shaun was not always a beer lover. Now she drinks anything from porters to double IPAs. Preferring sours and chili beers, Shaun is not a huge IPA or pale ale fan. Live Oak HefeWeizen changed her life, as it was the first beer that she legitimately enjoyed. She has been featured on such shows as The Cooking Channel’s Log On & Eat with Eden Grinshpan. Shaun’s day job is working as a graphic designer, her first love. She now incorporates her two loves, beer and graphic design, by doing the Bitch Beer branding and occasional shirt design.

Kat began her journey with beer when she forced herself to drink an entire Lone Star—and loved it. From that moment on, Kat knew she wanted to shove every beer in her path into her gullet. After trying Thirsty Planet’s Pumpkin Masala, she knew that her life would be forever changed. She has been featured on Bake Space’s webisode series, Kitchen Party. Including her interest in beer, Kat loves all things Scotland, has a cat named Charles and has a huge passion for nutrition and health. 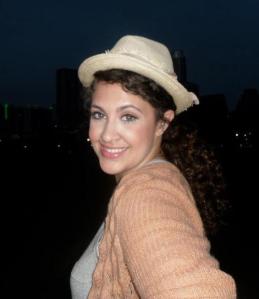 Sarah Wood, a QA engineer at a mobile solutions firm, loves great food, a good book, and an excellent beer (or 4). Although her boozy tastes have not always been quite so refined (Texas State, eat ’em up Cats!) she has pretty much reformed her frat-daddy ways (she almost never shotguns beers anymore) and is enjoying her continued education in the nuances of beer with her trusty pup Aloysius by her side. 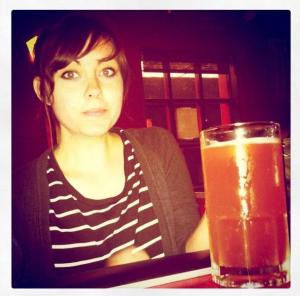 Jessica first fell in love with beer in arguably one of the best places in the world, the Czech Republic. During a summer abroad in Prague, she discovered that beer was less expensive than water and it didn’t take long to realize that it was also much, much tastier. Pilsners led to many more brews back in the States and a love and appreciation for the good stuff. She likes to draw, design, and hang with her adopted kitty, Otis.