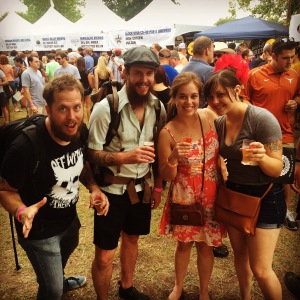 The 2015 Texas Craft Brewers Festival is just around the corner! Today, attendees can finally see what beers they’ll be sipping on, as the official beer list has been released.

The festival, which will be held Saturday, September 19 at Fiesta Gardens in East Austin, will feature roughly 150 different beers brewed in the Lone Star State.

The Texas Craft Brewers Guild, which puts on the TCBF every year, is hailing this year’s festival as the largest celebration of Texas craft beer EVER.

After checking out the list below, we’re confident your mouth will be watering. So, if you don’t already have a ticket to the fest, head HERE and grab one while they last. VIP tickets have already sold out, but general admission tickets are still available for the bargain price of $30, and designated driver tickets go for $10.

Kamala Brewing at the Whip In

Sit Down or I’ll Sit You Down
Velvet Hammer

Off With Your Red
Rapture Fusion Brown Ale

Save the World Brewing

Keep in the mind that the brewers and beer list are always subject to changes.