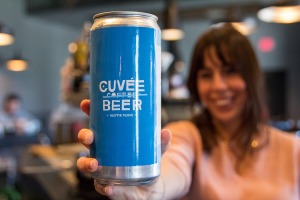 The Crowler in question. (Image courtesy of Cuvee Coffee)

The Crowler, engineered by seminal can-friendly craft brewery Oskar Blues in early 2014, is a 32 ounce aluminum growler that comes in the form of a large can. Like a standard glass or stainless steel growler, a Crowler is sealed on the spot in a taproom or bar to serve as a container for takeaway draft beer. While a standard growler is reusable, a Crowler is single use and recyclable. So, to recap–It’s a can. It’s a growler. It’s a Crowler. Get it?

Since launching the Crowler at Oskar Blues last year, several craft beer establishments across the country have also adopted the exciting new technology for keeping draft beer fresh. While Cuvée is the only bar in Austin currently serving beer to go via Crowler, at least three North Texas establishments have been filling Crowlers for months– Noble Rey Brewing Company, Collective Brewing Project and Lone Star Taps & Caps. The Whole Foods Park Lane location in Dallas also fills them, and word is the Fort Worth Hulen Location of Central Market started recently too. Houston bars filling Crowlers include Nobi Public House and Petrol Station. Cuvée was one of the very first to begin filling Crowlers, starting in December of 2014. However, the mandate from TABC to Cuvée just came down this past week.

“This is totally illogical,” Cuvée Owner Mike McKim told Bitch Beer over the phone today. “I’m going to fight this.”

Though the Cuvée team explained to the TABC representative that Crowlers don’t “re-package” beer any more than traditional growlers do with their sealed caps, the TABC maintains that there is a difference.

McKim said the conversation devolved into trying to piece out the difference between sealing beer via clamping, skrewing or crimping, and how that might affect what constitutes “re-packaging,” but no firm clarification on this issue has been given from the TABC.

McKim said the TABC representative also cited the way the Crowlers are labeled with a Cuvée Coffee sticker as a problem, leading to confusion about what beer is actually inside of the Crowler. But Cuvée writes the name of the beer on each sticker when they fill the Crowlers, and this is something that is rarely done on traditional glass growlers which simply sport brewery or bar logos, or can even be blank.

The TABC representative told Cuvée that they were allowed to fill traditional growlers at the bar, which sort of further reinforces the confusing nature of this decision. They also said that Cuvée could be permitted to fill Crowlers if they were brewing their own beer under a brewpub license (so this mandate seemingly shouldn’t affect brewpubs like Noble Rey or Collective) which Cuvée has no plans to do. There is no word on how the 30 day removal mandate given to Cuvée will affect the other retailers in the state currently offering Crowler fills.

McKim plans to fight TABC’s decision. We will continue to follow this story as it develops.

Update 7/15/15 3:20 pm: A few social media followers have asked, so wanted to clarify that Cuvée has not been prohibited from selling Crowlers during this 30 day interim between the notice and re-inspection, so customers can head down there for a fill if they’d like to show support.

Update 7/16/15 10:00 am: Austin 360 has coverage today of this story, including the following response from the TABC: “Only someone who manufactures that product can can that product,” TABC spokesperson Chris Porter said. “Canning is looked at as a manufacturing process, and a growler is looked at a little more leniently under the law.” For the complete story, visit Liquid Austin.

Update 7/16/15 12pm: If you’d like to send an email to the TABC with constructive questions/concerns/passionate arguments about Crowlers you can do so at questions@tabc.texas.gov.