When we read this emotional letter posted on Facebook today by Austin-based Rogness Brewing Company Owner Forrest Rogness, we knew we needed to help spread the word.

In it, San Marcos resident Colin Iliff explains to Rogness how staying up late to enjoy a bomber of the brewery’s Beardy Guard Saturday night may very well have saved his life as flood waters rose around his Aunt’s home in Wimberley where he was housesitting.

My name is Colin Iliff, I’m a resident of San Marcos, TX and your beer saved my life.

Now I know that may sound crazy, but let me explain. I was dogsitting at my aunt’s house along the Blanco river in Wimberley Saturday May 23, and had settled down with a bomber of your Beardy Guard while listening to the rain outside. The power had already gone out so I had been debating whether to just go to sleep or stay up to enjoy the beer. Naturally, I chose the latter. Throughout the evening I had heard about the threats of a flood but after several trips to check the river I was sure I would be high and dry. But about mid-bomber around 11:45 PM, I heard a faint but then intensified roar coming from the river, and poked my head out the door to see what was happening. Low and behold the river had risen 30 ft within half an hour, and was already heading towards the doorstep. I ran frantically around the house collecting expensive paintings, pictures, important documents, etc and threw them upstairs hoping they would be spared from the incoming surge, grab the two dogs I had been watching, ran out the door, and drove off. After driving up to the gate uphill from the house, I swung the car around to see where the water was, and right then a wall of mud, water, and trees (accompanied by a massive propane tank) slammed right into the house and the ground I had been minutes before. I found refuge in a kind neighbors house uphill and out of reach of the flood with a few other evacuees as we were trapped in that little stretch of neighborhood. The next morning after the flood subsided, I drove back to the house only to find… Nothing. The entire house, and all of its contents were gone. Swept downstream and littering the shore. I fell to my knees and sobbed my heart out, not only realizing that my aunt did not have a home to come back to, but because I was still alive. I had considered falling asleep, which surely would have left myself, Scrappy, and Suzy (the two dogs I was watching), dead. But I was too excited to have a great cold brew, and I survived.

That’s my story of how a beer saved my life. But others in the area weren’t so lucky. Hundreds of people are left homeless and heartbroken. I ask if you take anything from this story, it’s that you spread the word that people in Wimberley and San Marcos need donations of food, water, clothing, blankets, etc. Send it to the Red Cross and Salvation Army in the area, and there are multiple drop off points in those towns.

Thanks again for great brews Rogness, I wouldn’t be here without em.

PS I am attaching a photo of what became of my aunts house, and you can see for yourself why this was truly a disaster for many people 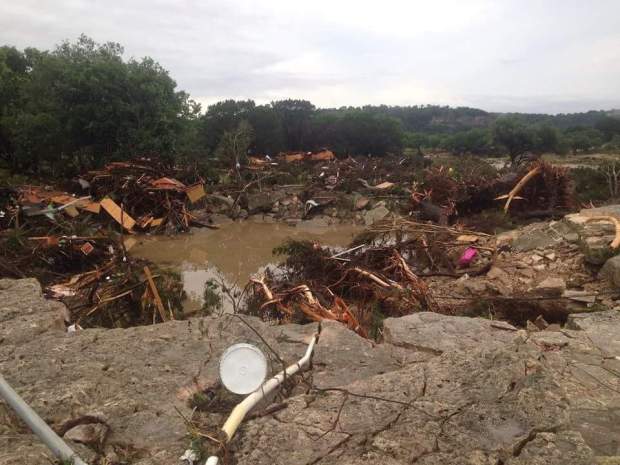