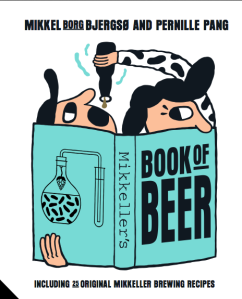 Mikkel Borg Bjergsø (more commonly known by his brewing moniker Mikkeller) can now add author to his list of worldly accomplishments with the recent American release of his first book “Mikkeller’s Book of Beer.” The book, co-authored with his wife Journalist Pernille Pang is chock-full of beery knowledge, from Mikkeller’s humble beginnings, to the history of beer itself, to recipes for pairing beer and food to even 25 original Mikkeller beer recipes for homebrewers to use and abuse at their leisure.

We caught up with Mikkel via email this week for a little chat about the new book. Check out his responses in the Q&A below…

Bitch Beer: Can you tell me about the inspiration behind the book and how the project came together?
Mikkel Borg Bjergsø: We were approached by a Danish publishing company that wanted to do a book about Mikkeller, Beer and Home brewing. And then it happened.

BB: This book covers a wide range of content, from your own personal background getting into brewing, to beer history, to recommendations by style, recipes, etc. When you wrote the book did you picture it as the kind of book most people will read cover to cover, or the kind of book where people will skip around and come back to different sections time after time?
MB: The first part of the book is a short intro to Mikkeller and craft beer history. This should be read in one go. The second part is about beer styles, specific mikkeller beers, homebrewing and food recipes, so more a book to come back to if you need information.

BB: This book was originally published in Danish last year before being released in America. Other than translating it, was there anything in the book that you had to adapt content-wise for American audiences?
MB: Not really. A few places in the places section, but not beside that.

BB: On top of having great content, this is just a beautifully designed book. Can you tell me about the process of collaborating with not only your co-author, but the designer and photographers who worked on the book?
MB: Design and aesthetic is a big part of Mikkeller. We work with a great designer Keith Shore, great photographers (Camilla Stephan and Rasmus Malmstrøm) and also had the pleaseure to work with a great graphic designer Maria Bramsen, who happened to be a pop star in Denmark when I was young.

BB: You include some delicious sounding (though relatively complex) recipes created by world class chefs to pair with your beers in the book. For some home cooks out there who maybe aren’t as advanced, do you have a couple simple, go-to beer & food pairings you’d recommend trying out?
MB: I’d recommend to try and pair beer with all foods. The recipes are more meant as a show of how advanced cooking and great restaurant beer can be worked together with. There are no limits. The chicken wings from Mission Chinese are fairly simple to make, but are my favorite food when travelling to the US. And they go very well with the beer we designer for MCF.

BB: One of the coolest parts of this book is that it contains 25 Mikkeller recipes for homebrewers, as well as a few recipes from other breweries like Firestone Walker and Three Floyds. Why was it important to you to share these with your fans?
MB: I am very inspired and learned a lot from great brewers when I home brewed. I want to share this with new home brewers to pay back.

BB: Have you tried clones of your beers that homebrewers have now brewed using this book? If so, what did you think?
MB: The recipes are the same but every system is different, so the beer will turn out different. You can come fairly close to the original as a homebrewer, and even do better.

BB: I’ve heard people compare the process of writing a book to pregnancy…it’s horrible and painful while you’re in the process of it, but once it comes out you’re proud and after time passes, look back on the experience like you can’t wait to do it again. With that in mind, after this experience, do you have plans to publish another book?
MB: Actually my wife is the author with me on the side. It was painful, special as I am extremely busy and the few minutes I had on the couch was used working on the book. I’d say never again, but then again…

BB: Lastly, I’m actually going to be in Copenhagen in about three weeks and am hugely looking forward to visiting War Pigs (Mikkeller’s new brewpub collaboration with Three Floyds). What has reception been like since it’s opened?
MB: Amazing. Beyond anything we would ever imagine.