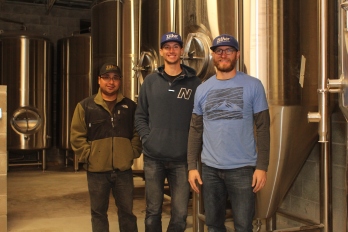 When we published “Austin Beer: Capital City History on Tap” back in 2013, we couldn’t have known exactly what the future held for beer production in Austin. (It’s really a shame too, because precognition would be a handy superpower for an author.)  Luckily, we did have the knowledge of history, and an educated guess on our side.

We ended the book with a chapter looking at a dozen or so breweries who were still in planning at the time, with a strong disclaimer that some may never see the light of day (now, a year and a half later 2/3 of them have yet to open their doors). This was our first introduction to Zilker Brewing Company, and it has been on our radar ever since.

Helmed by brothers Forrest and Patrick Clark, along with Co-founder/ Chief Brewing Officer Marco Rodriguez, Zilker is currently in the throes of construction, poised to open its doors in the coming months. That’s a big milestone, considering it took 14 months just to find an ideal location for the brewery. But, the time paid off with a prime spot for foot traffic on E. Sixth St. just across from The Grackle. 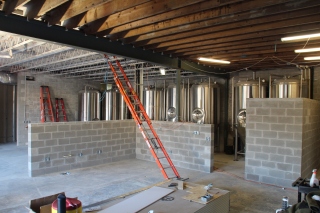 “It worked out great because we’re a perfect fit for this building” Forrest said, in a recent interview with Bitch Beer. “You go to other cities where people can ride their bikes up to taprooms or walk to them… ideally Austin would have a bunch of breweries like us in their neighborhoods.”

In the spirit of urban beer meccas like Denver and Portland, Zilker is building out a handsome and inviting modern taproom with plans to be open at least 4 to 5 days a week. The brewery’s 15 bbl brewhouse will be fully visible from the taproom, with a few 30 bbl production fermenters tucked away in the large, back warehouse. The taproom will boast eight to ten taps, ranging from mainstays to experimental taproom only releases. From there, the immediate plan is to focus on self distributing kegs around Austin, and to use a mobile canning company to can some of their flagships before eventually installing a canning line of their own.

As for the beer itself, Zilker has a distinctly American Belgo flair. Though, don’t expect that to mean they’ll be focusing on big, boozy dubbels, tripels and quads. Rather, quite the opposite. Zilker’s beers err on the clean, balanced, sessionable side, with many of their beers utilizing a trappist style ale yeast, and most of their planned portfolio coming in under six percent alcohol.

Prior to shifting his focus full-time to Zilker, Marco did an apprenticeship at Jester King to get more experience in a production environment, and while Zilker doesn’t have any plans to delve into mixed culture fermentation, he did take inspiration from the brewery’s commitment to quality, complexity, and utilization of local ingredients.

That local love also comes through in the brewery’s name.

“We wanted something that said Austin without actually having Austin in the name,” Forrest said.

So, they took inspiration from Austin historical figure Andrew Jackson Zilker, the last private owner of Barton Springs (and Zilker Park namesake). Zilker actually had some chops in the beverage world, as prior to the popularization of refrigeration he owned an ice company in Austin using water hauled from the springs. Owning a bottling company was another one of his enterprises.

“He was an entrepreneur just like us,” Patrick said.

To keep up with Zilker Brewing Company’s entrepreneurial progress, follow them on Facebook and Twitter. We’ll certainly help spread the word once the taproom doors are open.