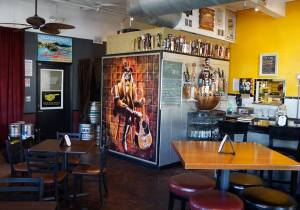 One of Bitch Beer’s dearest haunts (I mean, they support us every month for our Time of the Month #TrueLove) has a monumental milestone coming up this Sunday. That is right, folks. Hi Hat is turning two! And, man, they have an entire week planned to celebrate!

On top of it being the legendary Taco Tuesday, the Hi Hat crew is also serving up pours of a very special Ballast Point Victory at Sea cask – hanging out with rum-smoked oak chips! And Bitch Beer has a very special tidbit for readers: Hi Hat will be featuring their chocolate bread pudding. Can you even imagine the boozy, decadent pairing that would make?

Y’all. If you’ve never been to a Hi Hat beer dinner, you’ve got to just do it. You’ve got to. And this installment, starting at 7:00 featuring the outstanding New Belgium and Firestone Walker, is guaranteed to be a fantastic representation of chef Thomas Reeh’s and Habeab’s pairing chops. See this menu. Then drool. Then book a seat. Send your thank you letters to us via email Friday.

Tickets are selling for $75 a seat. Beers and mingling kick off at 7:00 with dinner starting at 7:30. There will also be live jazz featured on stage. This is basically the most magical night in Austin for the whole holiday season. Trail of Lights has nothing on this magic. Seats are limited! Make reservations at Hi Hat or by phone at (512) 478-8700.

Now’s the time when I have to come clean about something. Hi Hat has been holding back on us. Really, really holding back. They have a huge cellar list they are prepared to release on Friday AND they haven’t released the whole thing yet! What they have shared is as follows:

It is ZOEY’S BIRTHDAY! And I don’t care who knows it. Hi Hat is doing it up real big to celebrate the lovely Ms. Zoey with live music from Foot Patrol, dancing, and some of Zoey’s favorite beers, Green Flash Green Bullet Triple IPA and a special Das Wunderkind cask from Jester King!

The date of Hi Hat’s actual anniversary, and close of the festivities, Sunday is going to feature live jazz, extra special micheladas, beermosas, benedicts and oh so much more! It will definitely be a brunch not to be missed!

With so much on the books this week, we are sure to see many of you celebrating Steve, Rena, Habeab, Zoey, and the whole Hi Hat crew!