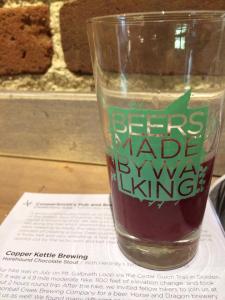 There are many, many events going on around Denver during  Great American Beer Festival week on top of the sampling sessions at the Colorado Convention Center. For Example, the always welcoming Wynkoop Brewing Company down the street (which was this year’s home base for Austin’s Beerliner) hosted a “Beers Made By Walking” event on Friday, October 3.

Beers Made By Walking is a program that invites brewers to make beer inspired by nature hikes and urban walks. The event takes place in various cities across the United States, and allows brewers to make interesting and unique place-based beers.

The Denver event did not disappoint. Local ingredients ranging from chokecherries, porcini mushrooms, honey, and  *ahem* “rocky mountain oysters” were all present. A nice reprieve from the hustle and bustle of the convention center, the BMBW event was small and approachable.All of the brewers and brewery representatives were eager to talk about their concoctions, and the walks inspiring them.

Some of the highlights included:

Riff Raff – Spruce Juice
A Colonial style ale brewed with the new growth from Spruce trees. Using a revised Colonial recipe where Spruce was used in place of hops for bittering, Riff Raff’s brewers added a mix of hops and Spruce to make the beer more sessionable. The beer was inspired by a hike in the trails in the San Juan Mountains.

Paradox Beer Co – Osa Frambuesa
This sour mashed Brown ale utilized a house Brett strain and souring bacteria. Raspberries were added during secondary fermentation to create a rich, fruity, yeasty brew. The beer was inspired by a hike in the Pike National Forest, near Signal Butte.