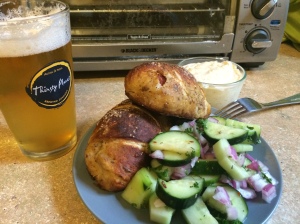 A few weeks back, the Texas-based ladies of Bitch Beer had the privilege to brew a 40 gallon batch of beer at Thirsty Planet Brewing with our lady-brewer friend Jessica Kapusinski on Thirsty Planet’s pilot system. The outcome (outside of the delicious brew fermenting away now) was what felt like 100 pounds of wet spent grain. Being brought up in the school of “waste not, want not,” the ladies walked away with no less than 12 gallons of spent grain.

Some of the grain, we froze for another day, but for the most part, we had to use it up quickly. Dog biscuits were a fast and easy utilization. Pig treats were even easier, as Angus happily scarfs the grain down as is. However, perhaps my favorite use for the tasty brewing byproduct has been spent grain pretzel dogs with house-made beer cheese.

You don’t have to twist my arm to get me to admit those dogs were demolished (with the remaining 3 cans of Hans Pils) in roughly 12 hours. They’d be awesome with mini sausages or even as just plain Jane pretzel bites.

If you aren’t a brewer, check in with your local brewery for how to score a couple pounds of this tasty by-product. I’m sure they’d be more than happy to hand it off in exchange for a dog or two. Be warned, though. It may become a habit.

2 Comments on Grains of Possibilities: Crafty creations with spent grain