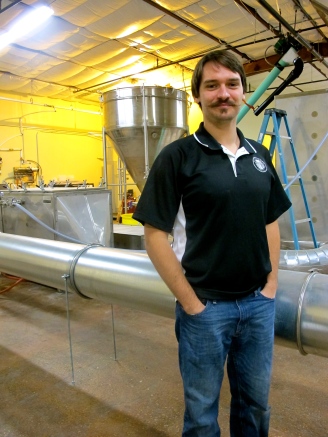 While it’s no secret that the craft beer climate in Texas has blossomed in recent years, leading to growing state pride for distinctly Texas brews, the average beer drinker may not often hit pause mid sip to contemplate where the ingredients in that beer actually came from.

Craft beer drinker and homebrewer Brandon Ade hadn’t put much thought into it either until he woke up one morning in 2012 randomly, or perhaps serendipitously, thinking about, of all things–barley. Soon, a question popped into his head–where do local craft brewers get their malt?

Ade’s malting epiphany led him down a rabbit hole of research, and he soon learned that no cereal grains of any kind were being grown and malted in Texas for brewing. As an engineer who had been looking for years to leave the field to start his own business, Ade saw a unique opportunity to play a role in craft beer production from its origins by supplying Texas brewers with the only barley malted right here in the Lone Star State.

“It just became an obsession with learning everything I could about malt,” Ade said.

While most craft breweries get their malts from titans of the industry like Weyermann in Germany, there has been a growing movement of micro-maltsters cropping up around the United States, a new tradition that sort of harkens back to an older tradition, as in the early days of brewing it was common for each brewery to have an adjacent malthouse.

These new micro-maltsers are starting to bring attention to what many like Ade consider an almost faceless industry. With traditional malthouses largely dying out in the 1900’s in favor of more mechanized production, around 30 major malthouses emerged to supply the bulk of the world’s breweries.

While malt produced and sold from new micro malthouses is often significantly more expensive, a product of smaller batch sizes, it’s the local product’s reduced environmental impact and increased local economic impact that drives maltsters like Ade to believe in the power of a local alternative.

It’s time to take the good sense of sustainable local food production and bring agricultural back to a local level. Why ship malt overseas, adding to transportation costs and environmental impact, when barley can be grown and malted right here in Texas? 100 years ago every brewery malted their own locally sourced grains. In the years since, the drive to maximize profits, increase yields, and squeeze every penny out of crops has given way to massive conglomerations of grain producers and maltsters who have taken away the local production of foodstuffs and disconnected consumers from their natural ties with agriculture and food sources. –Blacklands Malt

But wanting to become a maltster and actually becoming a maltster are two very different things.

“I realized immediately that I needed education and training,” Ade said.

So, he enrolled in a program at the Canadian Malting Barley Technical Centre in Winnipeg to receive some guidance. After this crash course, he returned to Austin and began to delve into a lot of thick textbooks and self-training.

From there, Ade put his engineering background to the test designing his custom 2-ton malting system, and he began to put the pieces in place to get Blacklands Malt, the newest, not to mention, only malthouse in Texas off the ground. Getting a bank loan proved to be a hurdle, with many banks pointing to Ade’s lack of experience and the unproven success of malthouses in Texas. Many brewers were equally uncertain when Ade called them to pick their brains about the idea.

“So many of them said “what?” “why?” and “you are crazy,”” he said. “It’s just so similar to the early craft beer days of people trying to start these businesses with this crazy idea of a local product, and there’s just not a lot of support for it.”

But of course, Ade eventually found the support he was looking for, and set up shop in his new micro malthouse off FM 2243 in Leander.

“That’s all behind me now” Ade joked. “So long as I can keep the lights on I guess I’ll have proved those guys wrong.”

While getting things off the ground in the malthouse, Ade has really come to understand both the science and the art of malting.

“There’s a lot of science and technology behind malting,” Ade said. “How I think of it is, let’s say you want to produce a style of malt, the science will tell you generally these are the times, and the temperatures and the moisture levels you need to hit. It’ll give you that idea, that recipe, and then you’ll start trying to apply that to barley.”

But much like the process of brewing a delicious, nuanced batch of artisan craft beer, the process of malting barley isn’t black and white and varies from crop to crop and system to system.

“Barley is the art of malting because the plant, the organism is living, and it changes over time,” he said. “Even if I take barley that I malt today, and I plant it and grow a whole new crop and malt it next year, it’ll be different, it’ll drift, it’s a living organism. It adapts. It changes. It evolves.”

While learning the art and science of malting was one barrier for Ade, making his dream of Texas malted and grown barley a reality was another hurdle entirely, but Ade soon learned that there was a growing niche for barley production in non-traditional environments.

“It’s only a matter of time before we start seeing the same issues with barley production and supply that we’ve seen with hops,” Ade said, referencing hops shortages like the one we saw in 2007 and 2008. “As more and more craft brewers are opening up and using increasing quantities of malt, and using more malt in their recipes than adjunct ingredients, then the world demand on malt increases and there’s only so many acres. It only takes one really bad year of flooding or drought to wipe out a huge region of the world that produces barley.”

This fact has led to an increased academic and private sector focus on the research of growing barley in non-traditional areas, like, Ade dreamed, Texas.

Taking a queue from hard red winter wheat, a cousin of barley which is often grown in Texas over the fall months, Ade and the team from A&M have found that Texas’s mild falls are suitable for barley growth as well.

“Our approach was to scoop up every barley variety you can find in the world, bring them here, plant them, and see which ones adapt,” Ade said. “There are many barley varieties out there that will do well in many different environments. I think there’s this general fear that there’s only like five varieties in the world that produce good barley, but when you’re starting to grow in non-traditional areas you have to think outside the box, so we [decided to] scoop ’em all up, plant ’em, and see what happens.” 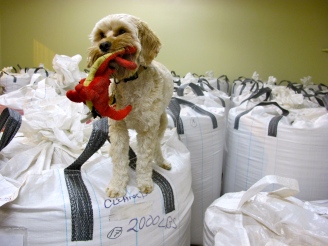 After eliminating the varieties down to three top agronomic performers, they contracted Texas farmers, mostly within a three to four hour drive of Austin, to begin growing these varieties.

“That data is very, very encouraging,” Ade said. “Barley will grow in Texas, we’ve shown that, we’ve proven it, and now …we’ve delivered seed and they’ve planted for this fall season to be harvested in May.”

These current crops will mark the first time in recorded history that barley has been grown in Texas on a large farm scale.

“I had one of my guys send me a picture of his fields and there’s a whole field of little three inch barley plants, it’s just beautiful,” Ade said. “I was really just taken aback by how far things have come.”

While the Texas-grown crops are progressing well, Ade needed some initial barley to get his Texas-malted operation off the ground until they could be harvested. So, he sourced some barley from Colorado, and has spent recent weeks breaking in the malthouse. The 2014 batch of Texas grown barley should sustain the malthouse for part of next year, but Ade plans to supplement with more barley from Colorado until he can have enough grown in Texas to last a full year.

The weight of taking on this lofty goal is not lost on Ade.

“I’m the litmus test, he said. “I’m the guinea pig in Texas. I’m the guy that whether I succeed or fail, people will use me as the litmus for “Can this work? Can we malt in Texas and be successful?””

But so far, so good, in early December Ade delivered malt to his first commercial brewing client, Jester King Craft Brewery, a natural fit considering the brewery’s strong commitment to brewing farmhouse beers with a sense of place.

Ade has also sold to a variety of local homebrewers, and has at least one more local brewery and a distillery on board for 2014.

But malt orders haven’t been the only sign of success. Earlier this month, Blacklands Malt received a $5000 culinary grant from the Austin Food and Wine Alliance. Ade plans to use the grant money to install a racking system so he can store his malt vertically to maximize space, source additional barley and, hopefully, bring on an additional regional producer.

Blacklands Malt is located at 11880 W. FM 2243 Suite 304 Leander, TX 78641. While you can often find Brandon, his wife Samantha, and their dog Riker there, visitors and homebrew customers are welcome by appointment. To connect with them,  or get a little background on Malting 101, visit their website.