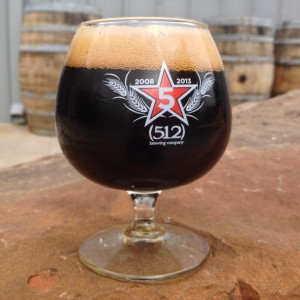 On the fifth day of Christmas, my palette began to crave (512) FIVE!

That’s right. Today’s addition to our 12 Brews of Christmas series comes to us from some of our hometown heroes at (512). FIVE is (512)’s commemorative brew celebrating their 5th anniversary. Released at their anniversary soiree at the end of October this year, this Imperial stout is dark and dangerous at 10.1% ABV. It is almost pitch black and rather viscous with tons of roasty-toasty coffee and chocolate malt aromas. One of the things I love most about sipping this big beer is the complex dark fruit flavors (i.e. plums, figs, etc.) and the omni-present alcohol-y warmth that follows the sip down my throat. We were lucky enough to indulge in a couple glasses at Hopfields second anniversary party earlier this month after spending the morning fighting the cold at Twisted X Brewing’s grand re-opening party, and I could almost forget the near-freezing temperatures with FIVE warming my core.

(512) FIVE is a limited release available on draft in craft beer bars throughout Texas. Ask your bartenders if they have a keg coming up or know of a place to get a glass nearby. Though it may be a hunt to find, this is one you don’t want to miss out on this holiday season.