The wins made Texas the sixth most decorated state at the festival by total medal count, only coming behind award strongholds like California, Oregon, Colorado, Pennsylvania and Virgina. The achievement makes 2013 the best year for Texas brewers since 2005 when the state won 12 medals (although that year, six of them were for Pabst Brewing Co. which was brewed through Miller in San Antonio at the time.) 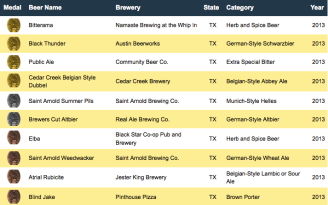 The increased medal count for Texas craft breweries is just one reflector of Texas’s growing standing in the national beer community.

“Seven out of the 10 Texas medals went to breweries and brewpubs which opened within the last 3 years,” Michael Graham, Co-Founder of Austin Beerworks said. “That’s a great testament to how quickly the scene is improving here.”

Graham’s sentiments are closely echoed by the Texas Craft Brewers Guild, an organization that aims to advance the common interest of craft brewers in the state.

“The Texas Craft Brewers Guild couldn’t be more proud of Texas breweries and their performance at GABF,”Charles Vallhonrat, Executive Director of the guild said. “Taking home ten medals is a major accomplishment, and Texas did it with style.  With both brewpubs and package breweries making impressive showings, the geographical representation of the breweries was also impressive.  From North Texas, Southeast Texas to Central Texas, we covered a lot of ground.  Our members really demonstrate what it means to “drink Texas proud!”

While established breweries like Real Ale and Saint Arnold were perhaps not-so-shockingly among this year’s medal recipients, many of Texas’s newest breweries joined them in the winners circle. 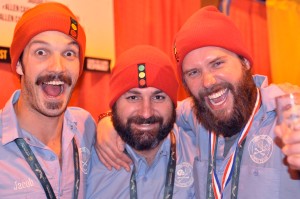 “All of us are stoked to win in our first year at the GABF,” Joe Mohrfeld, the Head Brewer of Austin-based brewpub Pinthouse Pizza said.

Since opening last fall, the brewery has received plenty of recognition for their beer, but a medal from the nation’s largest beer festival is certainly cause for celebration.

“The GABF has become so competitive over the years and every category is filled with so many great beers that it is an honor to be recognized alongside so many great brewers and breweries this year for Blind Jake (which took bronze in the Brown Porter category),” Mohrfeld said. “Having the chance to walk across the stage and have Charlie Papazian place the medal over my head for a beer that I designed and brewed is a moment I have been dreaming of since I started going to the GABF as a homebrewer nine years ago. The whole experience is still pretty surreal.” 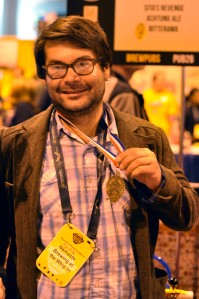 Head Brewer Kevin Sykes of Namaste with his Gold medal for Bitterama.

“Surreal” seems to describe how many of the winning brewers felt to have their names called at the awards ceremony.

So much so for Community Beer Co. founder Kevin Carr that after the bronze and silver medals for the Extra Special Bitter category were announced, he glanced down at his phone to see what the next category they competed in would be, only to miss seeing Community’s name pop up on the Jumbotron with a gold medal for Public Ale. (Luckily, Community Brewer/ Microbiologist Aric Hulsey’s scream alerted him.)

“We were going nuts!” Carr said. “It feels amazing to win. We are honored and humbled to receive this award, especially knowing how many beers and breweries were entered into the competition.”

That fact certainly rings true for The Whip In’s Namaste Brewing, which earned a gold medal for Bitterama in one of GABF’s most competitive categories, Herb and Spice Beer. 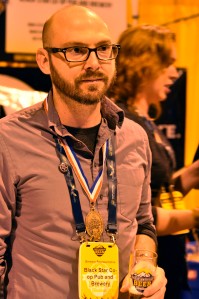 “To be honest I was stunned when Bitterama was announced and doubly so when we realized it was the third most competitive category,” Head Brewer Kevin Sykes said. “It is unexpectedly amazing. I am so proud of the Namaste crew and we are all so grateful for everyone in the local brewing community who has helped us out. We are all super excited for all our fellow Texas medal winners and excited for the strong showing from Central Texas.”

Perhaps no winning beer at the festival is more of an embodiment of that spirit of community than Black Star Co-op’s bronze medal winning Elba, a spiced American wheat beer which actually became the cooperative brewpub’s first member-owner designed beer when it was collaboratively conceived in 2011.

“Elba was a Member-Owner designed beer,” Black Star’s Head Brewer Jeff Young said. “So a win for Elba is a win for the Co-op.”

For some breweries like Austin Beerworks, who took home a gold medal for their Schwarzbier Black Thunder, a GABF medal was a chance to shine some light on a beer that may not necessarily be known as their flagship.

“Black Thunder has always been a house favorite, and it’s always been our slowest seller,” Graham said. “We don’t expect a GABF medal to change that, but we’re really proud that it got some recognition.”

-There were 10 Medal wins for Texas, up from last year’s nine.

-A total of 37 Texas breweries poured at the festival, up from last year’s 30. The upward shift is even more significant considering the fact that registration issues caused some established Texas breweries to miss the boat on booth space.

–Six of the nine medal winning breweries are from the Austin area, two are from the Dallas area and one is from Houston.

-Seven of the 10 Texas medals went to breweries who opened their doors in the last three years.

-For some interesting stats on the overall festival, check out this Brewers Association Press Release.

Outside the Festival Walls 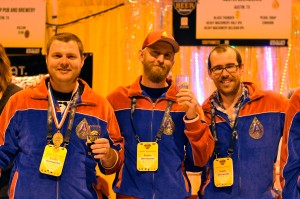 The always stylish Austin Beerworks crew were more than happy to accept their Gold medal for Black Thunder in their matching, bedazzled velour track suites.

Texas’s presence at the Great American Beer Festival was not just limited to the walls of the awards ceremony, or even the festival floor, thanks in large part to The Beerliner, a mobile beer-dispensing bus owned by NXNW/ Red’s Porch owner Davis Tucker and piloted by Fort Worth craft beer evangelist Tony Drewry. Throughout the course of the festival, as it has been in years past, the Beerliner was parked around the corner from GABF’s most popular party spot, the Falling Rock Tap House, to provide free Texas beer for anybody smart enough to gather there. Thanks to that glorious bus, hundreds of Coloradans, as well as travelers from around the world, got a taste of beer from breweries like Hops & Grain, Lakewood, Rogness, Community, and many, many more, regardless of whether or not they were lucky enough to get tickets to the actual festival.

The Beerliner’s residency at Falling Rock was just one (albeit extended) stop on the bus’s journey from Austin following Tucker as he rode his bicycle 1400 miles to Denver to raise awareness of prostate cancer for the upcoming documentary 1400 Miles. (The night before they made it to the Falling Rock, the bus actually stopped off at an event called Beyond the Beer, where Tucker spoke about the current state of craft beer on a panel moderated by another Texan, the Alamo Drafthouse’s John Gross.) 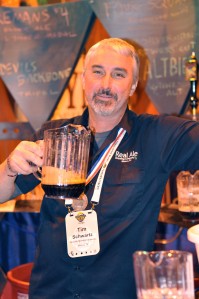 Does Tim Schwartz ever leave GABF without a shiny new medal?

Jester King Brewing may not have been pouring at the festival itself, but they did bag a bronze for Atrial Rubicite. They also got their beer in front of plenty of sour beer aficionados at the inaugural What the Funk?!, an unaffiliated festival hosted by Crooked Stave, that occurred Friday night at the Sherman Street Event Center. Likewise, Real Ale (who did pour at GABF, props on the epic endcap booth) served up some cans at Bonded by Beer, a metal show at the Summit Event Center Thursday night which also featured beer from 3 Floyds and Denver’s TRVE brewing.

Huge props to all the breweries who strutted their stuff at GABF! And for our fellow Austinites, rest up, because we’re doing it all again for Austin Beer Week in less than two weeks.