Since it is Father’s Day, the best way to celebrate it is by talking about fathers and daughters bonding over beer. Or more specifically, how I bonded with my dad thanks to beer. Let’s start with a little background info in case you haven’t heard this story before.

My dad tried a lot of ways to connect with me even though a lot of them didn’t work out. His intentions were good but they missed the mark somewhat. He took me hunting which I found boring and slightly horrifying. He tried to teach me to golf which I also found boring and slightly horrifying (though I did tough this one out longer than hunting). Everything my dad tried just seemed to bounce right off me.

Also, to further explain why this story is worthy of its own post, my dad was not a craft beer guy. He was a Modelo and Corona type of guy. Even seven year old Kat could tell that these beers were not enjoyable. They smelled weird but broccoli also smelled weird so take seven year old Kat’s opinions with a grain of salt. But my father didn’t know that there was a whole world of beer outside of what I would call watered down slop.

Fast forward to me beginning to write for Bitch Beer and getting a little geeky about beer and its many varieties. I began noticing that my dad was drinking sub-par beer and decided to take it upon myself to get him into craft beer. It started with me bringing two bombers of Jester King home for Thanksgiving (they were Le Petit Prince and Noble King, if I remember correctly). Dad really enjoyed them but still drank his Modelo.

The more I wrote for Bitch Beer and the more I gushed about this and that beer or so-and-so brewery, I like to think that my dad started to take notice. My parents have always been supportive of everything I’ve done. Bitch Beer is the next thing in a long line of activities my parents have supported. So more than likely, Dad has been reading everything we have written and got the idea that he should start drinking craft beer.

One day I went home and saw St. Arnold in the fridge and Real Ale in the pantry. I couldn’t believe my eyes. It was such a sudden shift in quality that I was wondering if maybe some alien with good taste had bodysnatched my dad. He began requesting things they can’t find where they live like Independence Brewing.

From that day on, I don’t know if my dad has ever had a Modelo again (if he has, I haven’t seen it). The other day he asked my mom to pick up some Deschutes Inversion IPA. When he visits Austin, he’ll talk about a Thirsty Planet beer he had at Banger’s or ask me for beer recommendations which is such an honor to me.

Moral of the story: Dads if you’re having a hard time connecting with your daughter, try craft beer. Unless, you know, they’re a child. Try going on brewery tours together or maybe start a homebrewing project! Beer has been bringing people together since it was first discovered—I think it can help you two overcome the fact that your daughter’s dating a vegan in a Wham! cover band. Maybe.

Happy Father’s Day, Dad! I’m sure this is a better gift than a card. 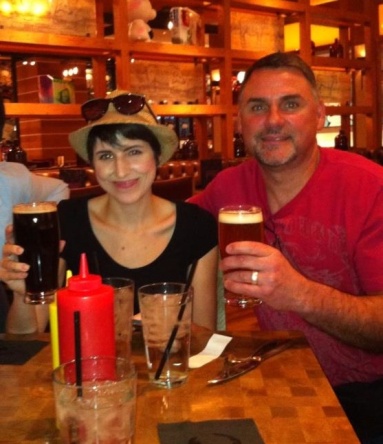