While it may not be aptly represented in the festival’s title, craft beer played a substantial role in the 2013 Austin Food & Wine Festival. In addition to the wine and cocktails wetting the palates of Austin food and beverage fans, beer from craft breweries like Real Ale, Austin Beerworks, Alaskan Brewing and Sierra Nevada was also available throughout the three day event. There was even a dedicated craft beer panel titled “For the Love of Beer.” The panel, which was moderated by Alamo Drafthouse Beverage Director Bill Norris, featured Adam DeBower of Austin Beerworks, Brad Farbstein of Real Ale and Terry Nance of Alaskan Brewing.

Below, we’ve recapped some of the most interesting, exciting and surprising things we learned about craft beer, cocktails and drinking in general from the For the Love of Beer Panel and the Austin Food and Wine Festival as a whole.

1. Real Ale has plans to launch a distillery. Following in the footsteps of “brewstilleries” like Ranger Creek and Ballast Point, the folks at Real Ale are planning to launch a spirits line known as Real Spirits in the next 18 months.

2. Alaskan Brewing is creating “beer-powered beer.” For the last six months or so, Alaskan has been using their spent grain as the sole fuel source for their new steam boiler, thus becoming the world’s first brewery to produce beer-powered beer. The innovative technology reduces the use of oil in the brewhouse by around 60 or 70 percent.

3. Even mixologists agree that fancy craft cocktail bars and good service often don’t go hand in hand. At his cocktail panel, David Allen aka the “Tipsy Texan,” said there are many craft cocktail bars that he considers his favorite bars he never goes to. While the drinks may be phenomenal, poor service and long wait times hurt the overall experience. 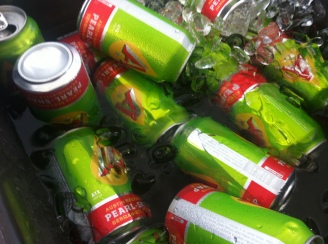 5. They give you some pretty full pours of wine, beer and cocktails at Austin Food and Wine, as opposed to your typical beer festival 1-2 ounce samples. Not sure about the legal difference, but we weren’t complaining.

6. We can no longer deny the obvious, cans are the future of craft beer. Cans are better for the environment, easier to enjoy for outside activities and more economical to transport. On the For the Love of Beer Panel, 2/3 of the breweries featured canned their beer, with the third acknowledging that it’s definitely in their future.

7. Some of the marketing tactics employed by the big macrobreweries actually benefit the craft beer industry. When asked by Norris whether the faux craft beer tactics of large macrobreweries infuriate them, some surprising points were made. While most of the panelists agreed that it was irritating to see large breweries trying to take up more grocery real estate with faux craft beer brands, Farbstein said that the big macrobreweries may actually be helping the craft beer industry more than they think. He pointed to the rise of “Best By” dates on bottles, which have actually led to consumer education on fresh beer. DeBower said that brands like Blue Moon actually get people used to drinking something other than adjunct light lagers, and may make them more likely to transition to drinking craft beer. The big takeaway though, is that all the brewers believed consumers are smarter than the big guys give them credit for.