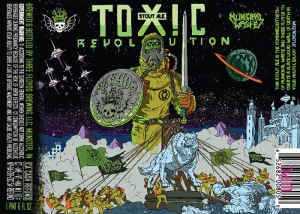 Remember that one time Hanson said they were making a beer called MMMHop after their revolutionary 1997 hit “MMMBop”? I do because I was fucking stoked for it.

Well that was more than a  year ago, and I am still not sipping on a beer that gets my favorite song from second grade stuck in my head. Luckily for cheesy-bands-who-make-beer fans, another equally good band (ha) has actually gone through with making their own beer: Municipal Waste.

The thrasher band has formed a surprising yet fitting partnership with the highly respected 3 Floyds Brewery to brew their beer, Toxic Revolution Stout Ale. Here’s what 3 Floyds had to say about the new brew:

The beer will be released this week, but since we live in Texas and our law makers love making it difficult for good breweries to distribute here, we probably won’t see this beer on shelves, like, ever. But if any of our readers are lucky enough to live in 3 Floyds’ distribution area or somehow get your hands on a bottle, let us know how it tastes!