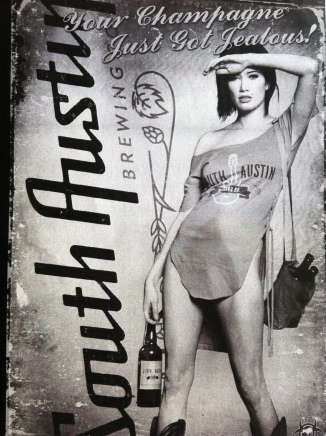 While taking in a Roller Derby bout over the weekend, a couple of us Bitch Beer gals were surprised to see an ad for a local brewery in the program. You see, we didn’t realize immediately that it had anything to do with craft beer, because at first glance it looked more like an advertisement for some kind of Affliction-esque clothing line or a PG13 Suicide Girls ad.

The ad (pictured left) was for South Austin Brewing and features a bottomless woman toting a bottle of beer with the tagline “Your Champagne Just Got Jealous!” Now, as opposed as we are to the use of exclamation marks, and as confused as we are about why she’s still wearing her cowboy boots, the more disturbing thing here is definitely the use of a half naked female to sell beer.

Not only did it seem to be an odd fit for roller derby, a sport that’s actually about empowering women to compete versus turning them into oversexed sidelinettes, it seemed a poor fit for craft beer. Yes, from time to time craft breweries have put things like sexy cartoon wenches on their bottle labels, and more on that later, but on the whole, the industry has never slumped to the level of the Super Bowl tit-pedaling macrobreweries of the world.

Never before have I been confused about whether a craft brewery is selling beer or sex.

Ironically, Lone Star, a beer brand started by Adolphus Busch and owned by Pabst Brewing Company, advertised in the same program, and produced a female-targeted ad featuring a skater crushing a beer can on her head. The ad (pictured right) was as clever as it was badass. Frankly, if my beer purchasing decisions were based on the contrasting vibes of the advertisements alone, I’m suddenly a lot more likely to shotgun a can of the ol’ national beer of Texas than to pour myself a snifter of saison. For a gal like me, that’s saying something.

Both of these ads feature the same three things–a woman, a container of beer and a pithy tagline, though they couldn’t be further apart in connotation. In the South Austin ad, pantyless and mere picas from a snatch flash, the woman is being portrayed as something you’re pretty much expected to drink up right along with the beer. Conversely, the Lone Star ad features a strong woman interacting with the product in a very different way, I mean she’s pretty much making that can her bitch. Furthermore, in the Lone Star ad, it’s pretty damn clear that the woman is supposed to have consumed the beer herself, while in the South Austin ad it looks like the gal is just offering the beer up to horny/thirsty readers.

Now, before this turns into a full-on debate over whether the South Austin ad is sexist or just sexy, whether it objectifies women, and whether all women are likely to be offended by it or not, that’s not really the main concern here. Rather, what I would deem more troubling is the fact that an advertisement like this is alienating to female consumers.

Here at Bitch Beer, our mission has always been to make craft beer more accessible to women. We met too many ladies who had sworn off beer all together because they never experienced anything better than the watery adjunct crap some frat bro pumped them from a keg in college. To be frank, those efforts, and the efforts of so many passionate female (and for that matter, male) craft beer advocates that came long before us, are hindered when a male dominated industry puts out advertisements that feature women as titillating objects of affection rather than as valued consumers of their products.

If you don’t believe me, believe a British study conducted by Molson Coors that found that 42% of women surveyed believe that ‘changing the advertising’ is the biggest thing that could be done to make beer more appealing to women. That’s a statistic that shouldn’t be taken lightly when you consider that women are actually responsible for 85% of all consumer purchases in America.

It should be noted that South Austin Brewing is not the only offender here, and this post was certainly not made in any effort to demonize them as some kind of lady-haters, nor am I suggesting that the idea of men liking half naked women is some kind of revelation. Seeing the ad was merely a catalyst to have a dialogue about what has been an ongoing issue in beer advertising (plus, you know, like all advertising), certainly as it applies to the Big 3, but, what we’re learning is that craft breweries aren’t innocent either. Clown Shoes has received heat for their “Tramp Stamp” label (pictured right), and Texas BIG BEER Brewery (pictured left) made a similarly classy brew known as Big Ass Blonde (note the horrifying display of denim on denim) before a copyright issue forced them to change the name to Big Texas Blonde. Aw shucks, what a loss.

‘Community’ is a huge word that gets tossed around when it comes to craft beer. Hell, I’m sure a lil’ search of our website for the word would yield copious results. And, it’s true, so much of what is appealing about supporting small breweries is wrapped up in the idea of knowing exactly who is producing the beer you’re drinking and exactly who your dollar is supporting.

“Meet the brewer” nights, brewery tours, pint nights, anniversary parties, etc. all serve to heighten the vibrant community of craft beer, to introduce producers to consumers as allies in a quest for quality and the fostering of a true beer community. But, is it really a community when a brewery’s advertising has the potential to alienate half of the population? Can’t we all agree that if craft beer is ever going to surpass 5.7% of the market share of beer consumed in this country, that it’s going to take the help of more female beer drinkers? Can anybody pull off closing an article with a series of rhetorical questions without sounding like Carrie Bradshaw?

Of only that last question am I uncertain.

*All beer labels and photos of advertisements are displayed for educational purposes and should not be reused.