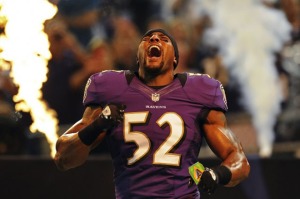 I love football. There’s nothing quite like drinking a cold craft beer and munching on some queso while watching a bunch of muscley, sweaty men beat the fuck out of each other and shouting at the TV either in celebration when your team intercepts the ball and returns it for a touchdown or cursing like a sailor when Dez Bryant drops his third pass that day because, like, seriously Dez, WTF? But I digress.With Super Bowl XLVII this Sunday and as the only Bitch Beer girl who can name all 32 teams in the NFL and can still remember the ’93 Super Bowl when the Cowboys annihilated the Bills, it’s time for a good football-themed drinking game. Whether you’re a Ravens or 49ers fan, a new commercial lover or just there to see Beyonce *cough, lame* this drinking game is sure to get everyone nice and boozed up.

Finish your beer if:

So don your favorite football jersey, grab a cold brewski and enjoy the last pro football game until next September. And remember, even if your team loses, just be happy you’re not like me – a born and raised Cowboys fan