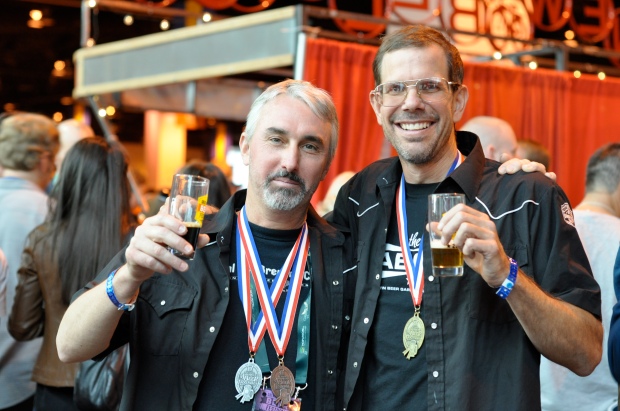 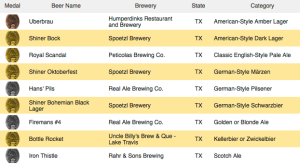 That made the “Southwest” region of convention hall pretty much Texasville, USA, with more than half of all the booths in the section hailing from Lone Star state.

Yes, all in all, Texas breweries took home a combined nine medals at this year’s festival, more than doubling last year’s takeaway of four medals. In fact, it was the best year for Texas brewers since 2005 when the state won 12 medals (and that year, six of them were for Pabst Brewing Co. which was contract brewed through Miller in San Antonio at the time.) 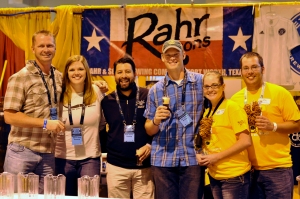 Fresh off a silver medal win, the Rahr and Sons crew hang out at their booth.

On the festival floor, Texas breweries offered up their usual lineups, as well as some extra special stuff just for GABF.

(512) Brewing brought out their legendary Whiskey Barrel Aged Double Pecan Porter, which was wiped out by the end of the second session. Jester King Craft Brewery enticed crowds with Das Uberkind! an ingeniously named, higher ABV version of their sour saison Das Wunderkind! 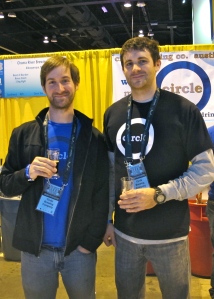 Round Rock’s Flix Brewhouse served their original brews in one of GABF’s newest attractions, the Brewpub Pavilion. Seeking to recreate the brewpub atmosphere, the pavilion featured 24 booths hailing from all over the country, as well as small bites from rotating brewpubs, and, perhaps most importantly, some cushy seating.

The Texas Craft Brewers Guild also had a booth to speak with festival-goers about the Texas craft brewing industry and serve up a variety of brews, including new stuff from Real Ale Brewing, Freetail Brewing Company and more.

And the presence of Texas beer extended beyond the convention center walls. 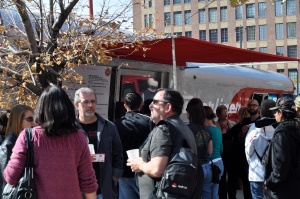 The NXNW/ Red’s Porch Beerliner, (a 40ft 1974 school bus which has been outfitted to dispense beer) posted up around the corner from the infamous Falling Rock Tap House to bring a little of the Lone Star state to Colorado.

Whether people drank aboard the Beerliner, or just hung out drinkin’ on the sidewalk, the response was pretty awesome, with many folks returning multiple times throughout the weekend to experience what different breweries had to offer. (The fact that it was free craft beer probably didn’t hurt either.) 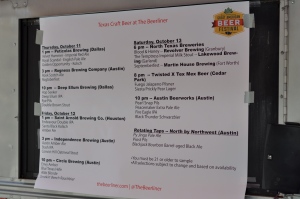 Texas beers also made appearances at the Falling Rock Tap House. As part of their special GABF tappings schedule, Rogness Brewing’s Yogi, Real Ale’s Scots Gone Wild, and the first keg release of (512) Brewing’s Wild Bear all went on draft at various times throughout the weekend.

More than a few brewers and industry folks from other states told us that they admired the tight-knit nature of the Texas craft beer community. This fact was made abundantly clear in awards ceremony cheers, and large Texas contingents mingling throughout the festival and around Denver.

All in all, this year’s increased presence of Texas-based breweries, and higher medal count are a true testament to the rapid growth and rising quality of the Texas craft brewing industry. Expect even bigger things in 2013.